Streann wins Innovation Award at NAB 2018
Streann Media is a SaaS platform that is reinventing content distribution, engagement, and monetization. 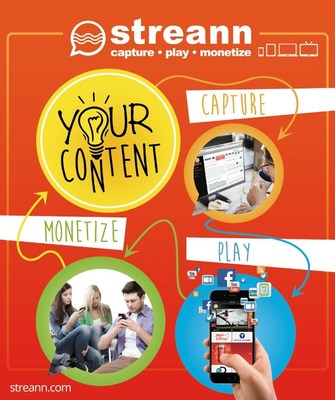 LAS VEGAS, April 10, 2018 /PRNewswire/ -- The National Association of Broadcaster (NAB) trade show in Las Vegas  is the largest show for media, entertainment and technology.  The Produ Awards at NAB started in 2017 with the vision to promote media innovation in the Americas. The awards are judged by 40 selected group of industry leaders called "judges" that include executives from companies like, NewTek, LiveU, Sony, Grass Valley, etc.

Streann Media wins Innovation Award with the platform CARIFLIX, the Netflix of the Caribbean. Cariflix has been producing new original content exclusive for their digital platform targeting the Dutch speaking countries of the Caribbean. The content can be watched on web, iOS, Android, Android TV and Roku. From video on demand, Live streaming, user generated content and much more, all developed by Miami based company, Streann Media.

"We are extremely excited to have won, in February 2018 we were selected Top 20 start-ups by Google Entrepreneurs in Silicon Valley and now winning Innovation Awards is a great recognition of our game changing technologies that are touching millions of people and generating new revenue streams for content providers," says Gio Punzo, Co-founder & CEO of Streann Media.

At NAB 2018 Streann is presenting 5 new solutions with live demos at booth N6527 and N3738 in the Sprockit innovation hub. The new additions to their INSIDE family are 100% in the cloud: "We are here to rescue the broadcast industry, we design new features to help media companies make a huge leap in technology" said Antonio Calderón, Co-founder & CTO of Streann Media.

Streann's value proposition goes right where it counts, digital monetization. How does a TV station or radio station make money? Selling advertising. While traditional advertising spending is down and it's boring; digital ad spending is up and should be more engaging, said the co-founders, who previously worked in the broadcast industry.

"We built a digital advertising technology that can increase digital ads revenue times 10 in live video, audio and video on demand. Our customers create campaigns like in Facebook Ads Manager but the ads are in their own digital networks. Content providers are in control of CPM and they finally monetize. With our technology, our customers are engaging with end users and most importantly they are monetizing in digital," Punzo said.

"Streann looks at the future of television like no one else is. Its user experience and monetization platforms make companies take a huge leap in technology. They are at the forefront constantly and have a personalized and exceptional relationship with each client," said Raúl Domínguez, digital and new business director of TCS Digital.

Streann has deployed over 250 platforms on Web, iOS, Android, Roku, AppleTV.  Customers are top 5 content providers in their region or market segment, like TCS Digital in Central America, Actualidad Radio in Florida, Cariflix the Netflix of the Caribbean, Iriejam in New York, ATV in Peru and PuraVida in Costa Rica that use Streann's inventions to engage with end users.  "The results have been great — real ads impressions, new user generated content, real testimonials, real storytelling," said Punzo.