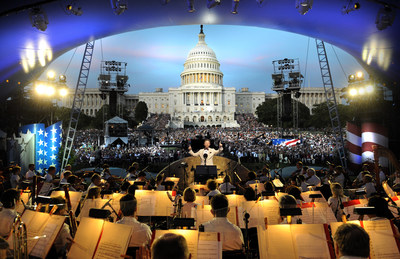 Capital Concerts Executive Producer Michael Colbert said, "I am deeply honored to accept these awards on behalf of Capital Concerts. The NATIONAL MEMORIAL DAY CONCERT, which returns this year for a special 30th anniversary broadcast, has become an American tradition honoring our military heroes. A CAPITOL FOURTH, the country's longest-running live national July 4 TV tradition, will mark 39 years on air as America's Independence Day celebration for our entire nation. We are proud to commemorate our country's freedom and independence with these time-honored live events at the U.S. Capitol."

Each program broadcasts live nationwide on PBS from the West Lawn of the United States Capitol before a concert audience of hundreds of thousands with millions more globally via the American Forces Network to our troops serving around the world.

The programs are a co-production of Michael Colbert of Capital Concerts and WETA, Washington, D.C. They feature an award-winning production team that includes the top Hollywood talent behind some of television's most prestigious entertainment shows including the GRAMMY AWARDS, COUNTRY MUSIC AWARDS, TONY AWARDS, SATURDAY NIGHT LIVE, and more.

About Capital Concerts
Capital Concerts is the nation's leading producer of live patriotic television shows, including PBS's highest-rated performance specials: NATIONAL MEMORIAL DAY CONCERT and A CAPITOL FOURTH, the premier celebrations of America's most important holidays broadcast from the U.S. Capitol in Washington, D.C. For more than 35 years, these two award-winning productions have become national traditions, bringing us together as one family of Americans to celebrate our freedom and democratic ideals and to pay tribute to those who defend them. The holiday specials have been honored with over 80 awards including the New York Film Festival Award, the Golden Cine Award, and the Writer's Guild of America Award.